Since my last post on the site. What’s crazy is that in the past two weeks, I have not taken the cars hardly anywhere.

I dropped the ’37 off at Greg’s house the other day, and had him take a look at it, to help me troubleshoot. He called me after a little bit of time with it on Saturday and told me that the timing was off about -23 degrees! Problem is, there’s no room to adjust the distributor without either moving the engine forward or modifying the firewall. It was tight up against the firewall, with no room to budge! I sure as heck didn’t want to cut the firewall, and moving the engine was way more involved than it first sounded.

I asked Greg what his hammer supply looked like, and if we took the distributor out, would we even have enough room to tap the firewall. That’s when he pulled out his air hammer. He didn’t want to, but I made him demonstrate how to use it. Once he showed me, it looked like a lot of fun, so I went to town and proceeded to bang the daylights out of the firewall, just behind the distributor.

SUCCESS! Ok…so it’s not a beautiful job, but I was successful in creating a nice 3/4″ recess in the firewall, without having to pull the engine and without cutting the firewall! I shot a little rattle can primer over the newly created recess, and we were able to get the distributor rotated to the right timing setting, with a little room to spare! 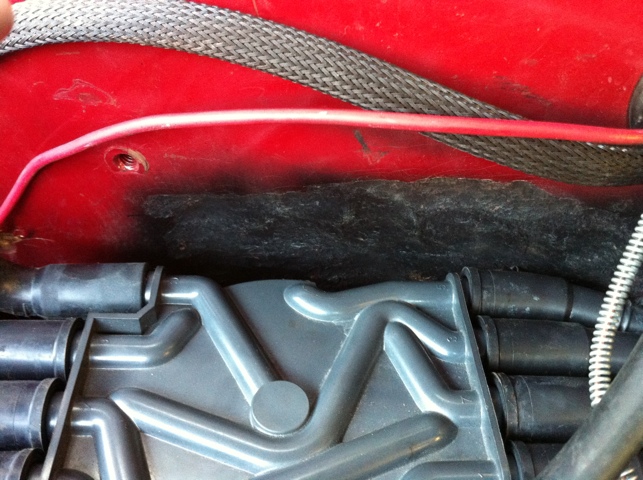 The engine ran a little better, but still had a nagging and irregular miss in it. We decided that before we spent much more time on it, Greg should get to better paying customers stuff, and I would run the car down to the speed shop and see if they can disable the rear O2 sensors, since they are only a few inches apart from the front ones, and there’s no catalytic converters on the car.

I did run the car to Sho-Me Speed shop, down in Nixa today, and Wes put his computer on the car, but he wasn’t able to get in to modify the settings. He was going to e-mail the computer company and see if they had a workaround for him.

I took the car home, and decided to start looking at spark plugs, to see if I could find one that was guilty of the occasional miss! Pulled the #1 plug, it’s fine. Reached for the #3 spark plug wire and saw what I decided was the problem. It had a hole in the outside layer, and the inside insulation was cracked. The dang thing had been burned through on one of the headers! 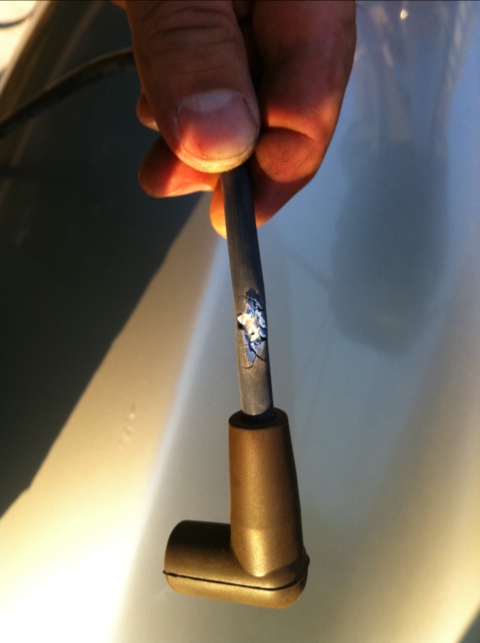 A quick run over to O’Reilly and a half an hour later, the plug wires are all changed and the car runs pretty dang smooth again! WHEW!

Gotta remember to start with the simple stuff!!!