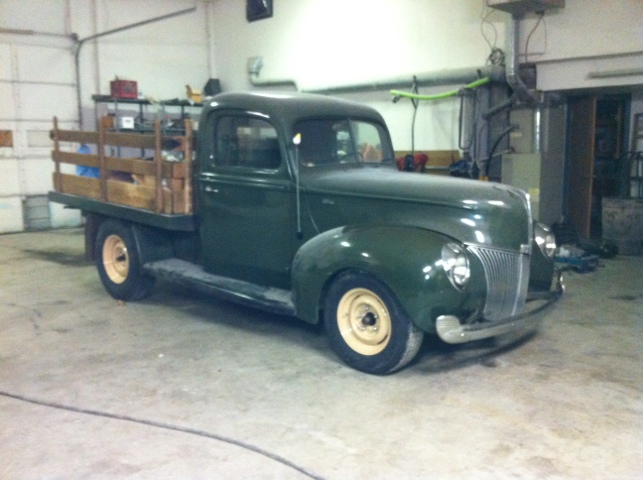 So last Saturday, the ’40 truck started having a starter that wouldn’t turn. When I would hit the button, it would initially make a switch noise, then NOTHING! Racked my brain trying to figure out what it “could be”, even pulled the starter on Tuesday night to test it yesterday. The starter motor spins like a champ!

Installed it again last night, flipped the switch, hit the button and back to the same old stuff. NOTHING! Went ahead and swapped the starter solenoid, same thing. Now the panic is starting to hit me. Could I have siezed the motor??? Then…I accidentally bumped the quick disconnect on the negative cable, to find that it was loose and not making good ground. Tighten it back up and BINGO! Cranks over the engine like there’s no tomorrow!

Problem now becomes, why won’t the darn thing fire??? I put Doug’s spark plug tester on one of the spark plugs and it’s getting fire and it “wants” to start, but just won’t, and won’t even think about continuing to run after I let off the start button. I check all the wiring under the hood and consult the wiring diagram again. After racking my brain…there it is, plain as day. I had mistakenly removed the wire from the “coil” to the power source, when the ignition switch is on. After I replaced that, it fired right up!

I moved all the junk out from in front of the truck, hopped in and drove it in a first gear, no brakes, circle in the lot in front of Show Me Rod & Custom, just to celebrate! Good thing Doug was there to help me stop it completely, when I rolled back into the building! 😉

Next time I head to the shop, it’s time to pull the driver side water pump and adjust and bleed brakes!