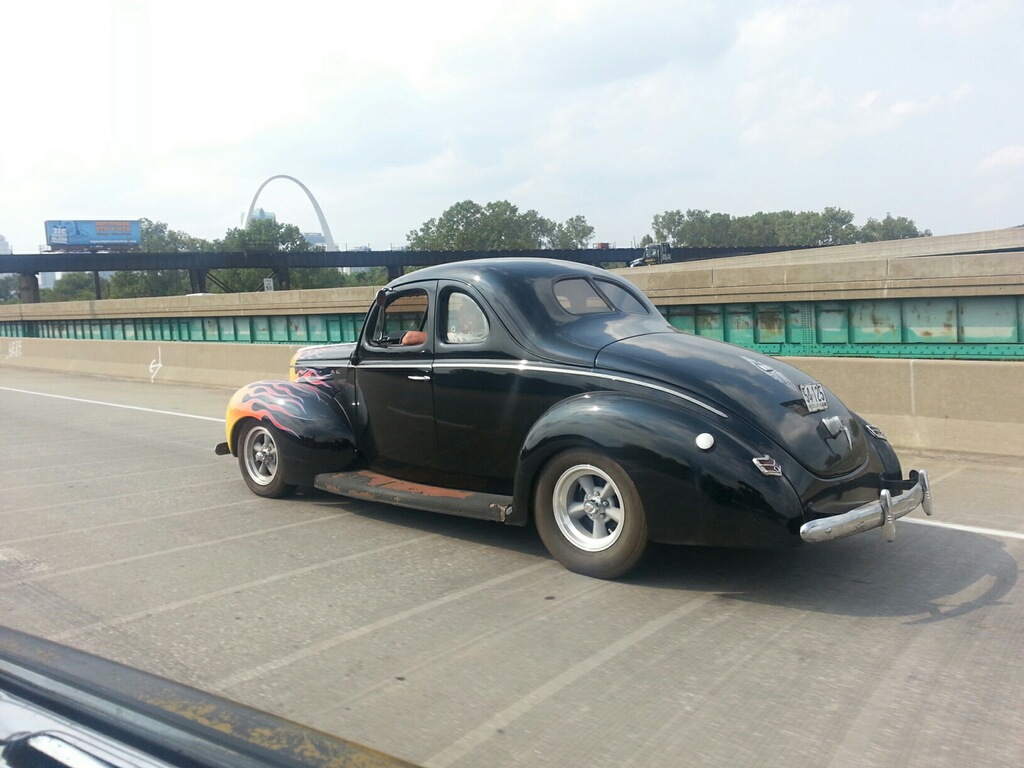 Chronologically not correct, but it makes a cool opening shot. Lori, my sister, took this photo on the way back into St Louis, on the ride home.

I’m a week late, posting the trip coverage for the 2015 Frog Follies. What can I say…life got in the way of posting updates.
The E’Ville Iron car club has been hosting the Frog Follies for 41 years, and beginning in 2011, it became one of the events that is on the “Dad and me” event calendar. This year, however, my sister and brother-in-law, Lori and Doug White, had a running and driving hot rod, and they were able to make the trip with us.

Over the years, the website has become less about covering actual events, and more about “The FUN is in the RUN!!!”, due to that is where I have my fun. Shows are great to see friends and look at cars, but lately, I forget to take photos of the ones that I really like!

We traveled up to Dad’s house, on Thursday evening, then hit the road for Evansville, on Friday morning. Once there, Clay and Mike Vance joined us, and we had a great weekend of hanging out. We even stayed for the ham dinner, on Saturday evening. To quote some friends of ours, “It’s pretty good…It’ll fill you up!”

Quite surprisingly, from the start, from Springfield, through the entire trip and a run to my office before my latest fill up of gas, I drove the coupe 1000.7 miles, to the best of my google maps route tracing abilities. Hammering down the highway around 70-75, I had a trip MPG average of 16.939. Not bad for a hopped up motor and a heavy “go pedal” foot.

Nevertheless, here’s my limited show coverage post of having fun on the run with friends and family!

By the way, I would be remiss if I didn’t mention that you can join us, and have some “Fun in the RUN!!!” on October 10, 2015. The CrossMembersCC is hosting the 2nd Annual St Louis area Hot Rod Hundred Reliability Run. Pre-registration closes on September 13, so if you want to join us, get the registration filled out and sent in before next Saturday. 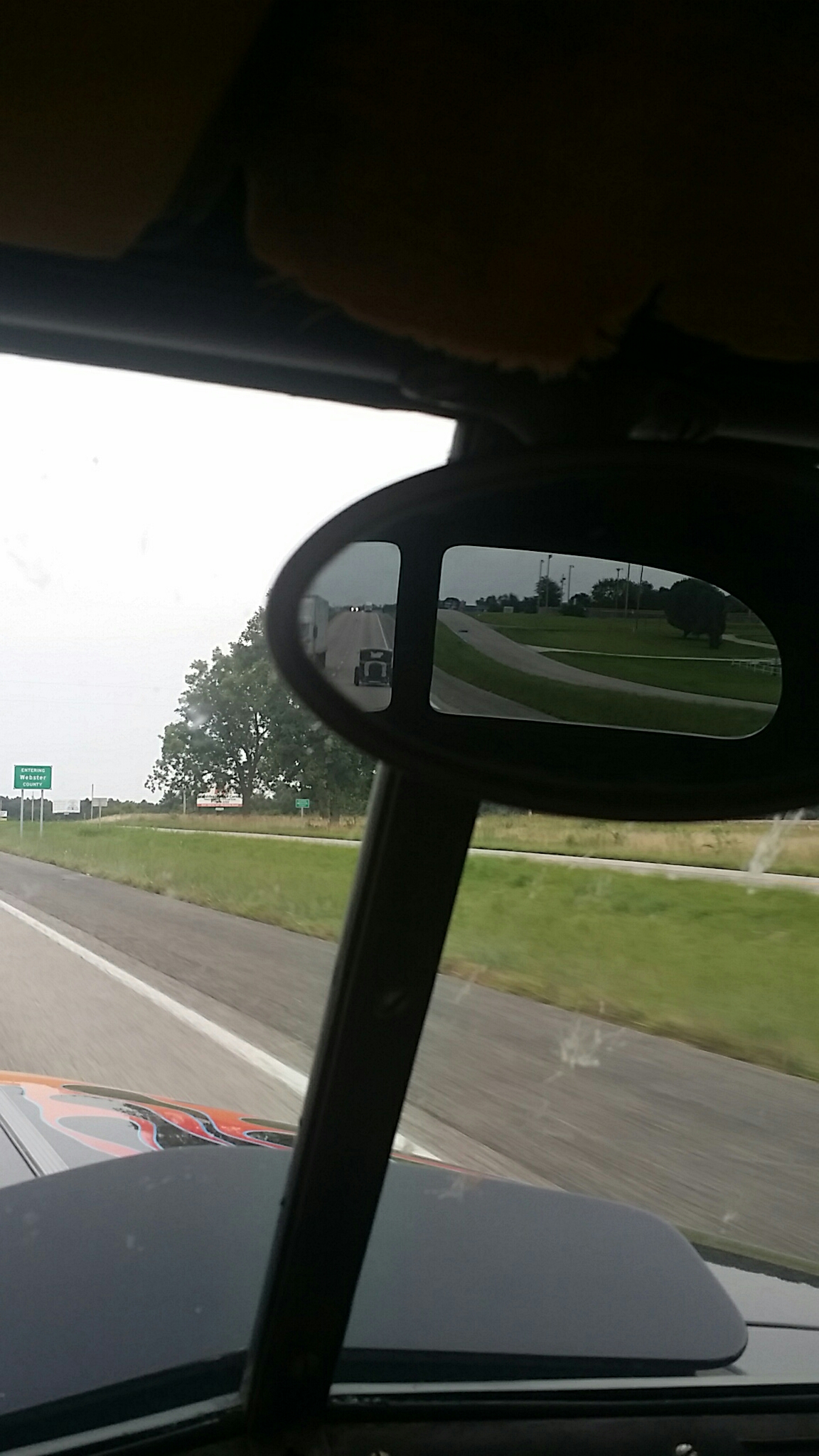 A peek back in the rearview mirror. Yup…Doug and Lori are still with me! 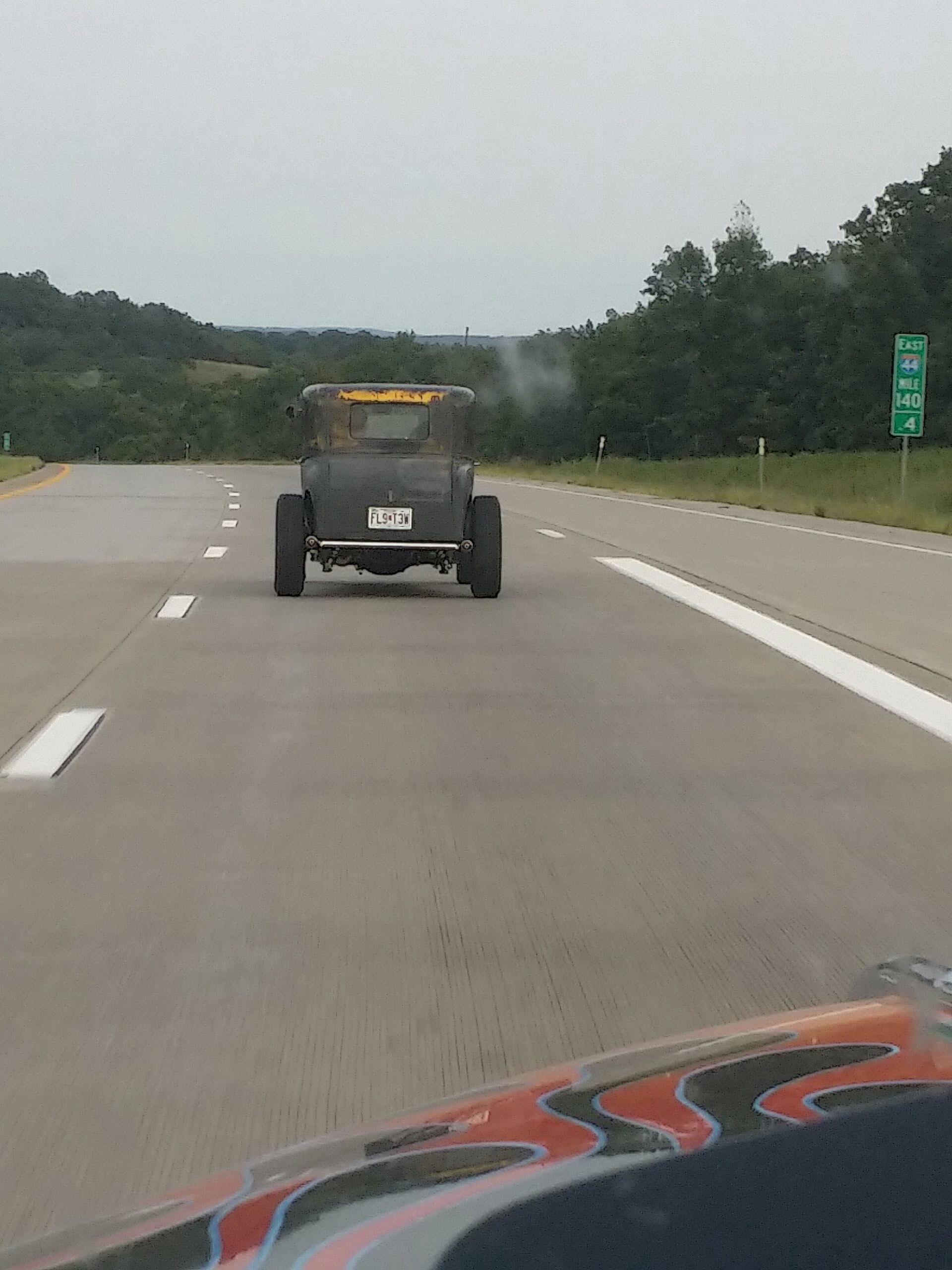 Sometimes you just have to let the other guys lead. 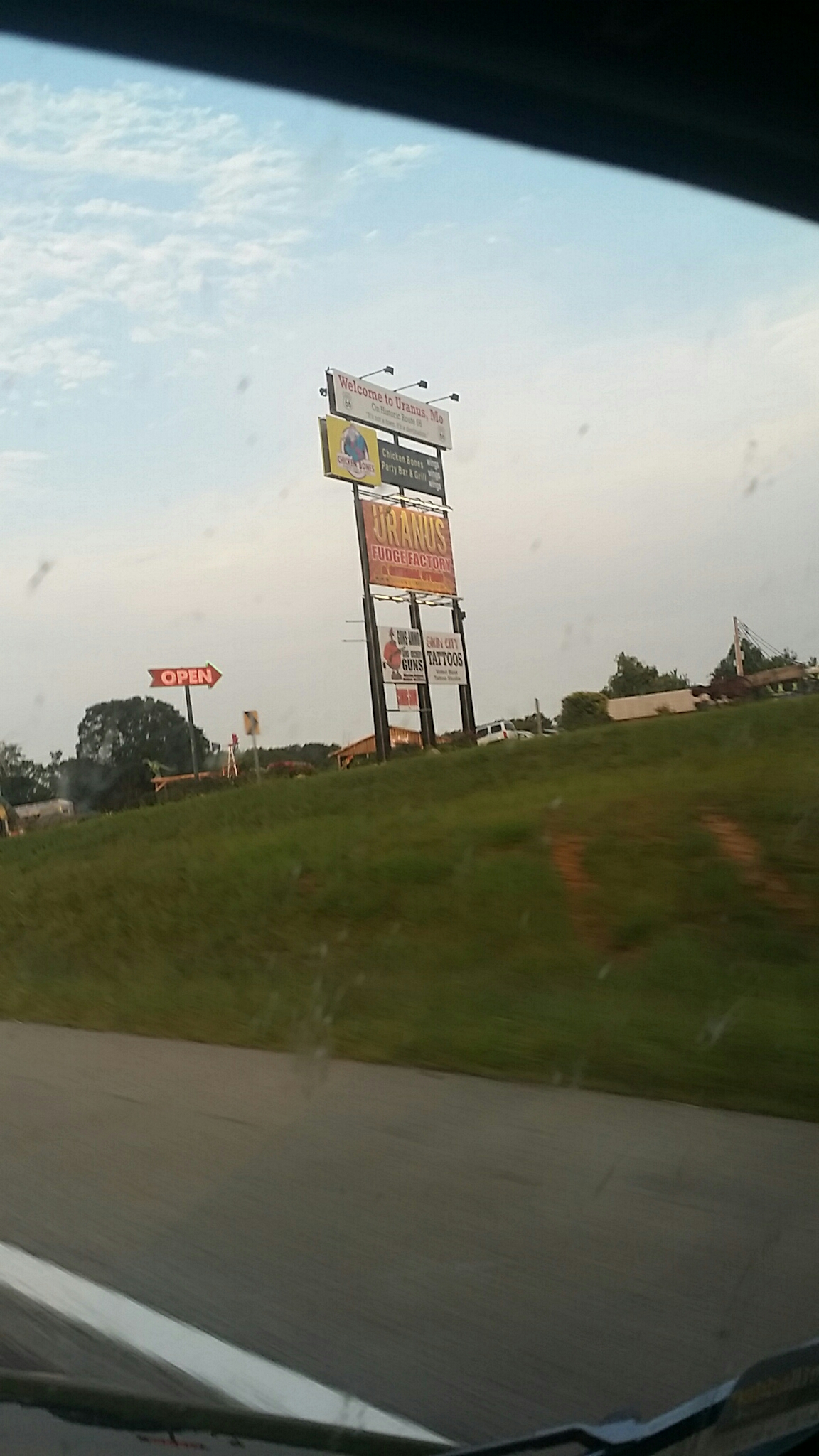 We wound up driving through Uranus on the way. 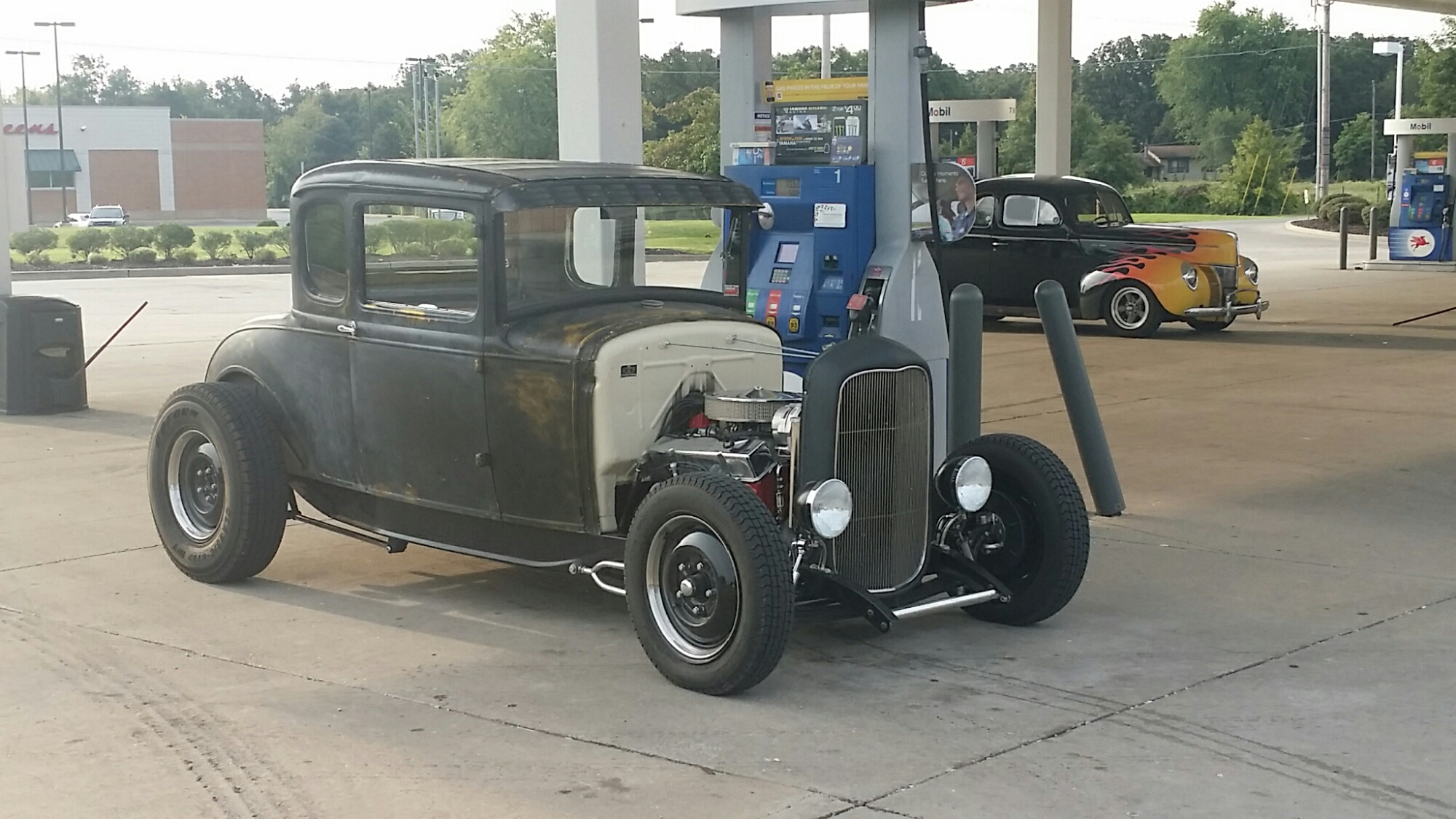 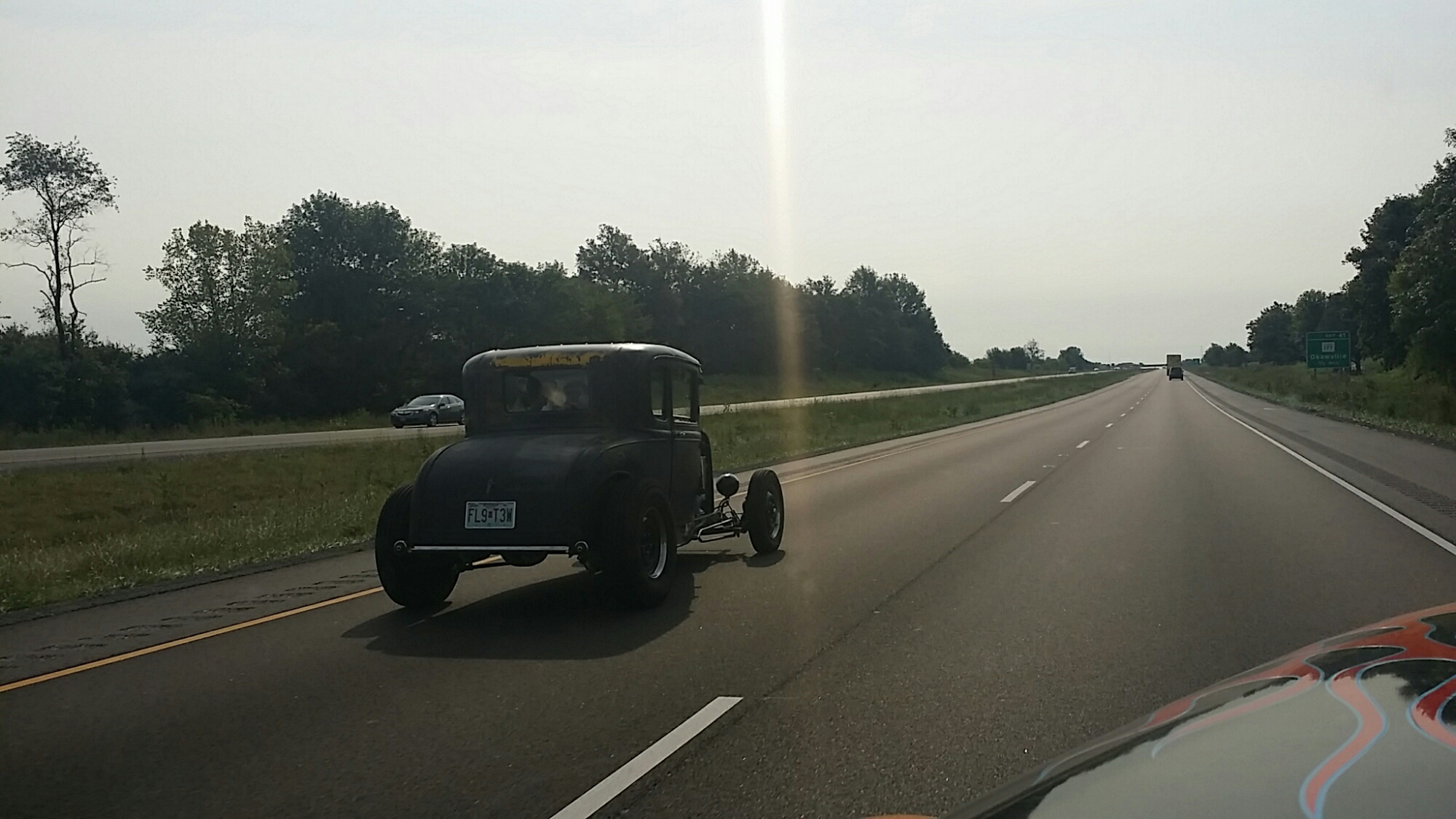 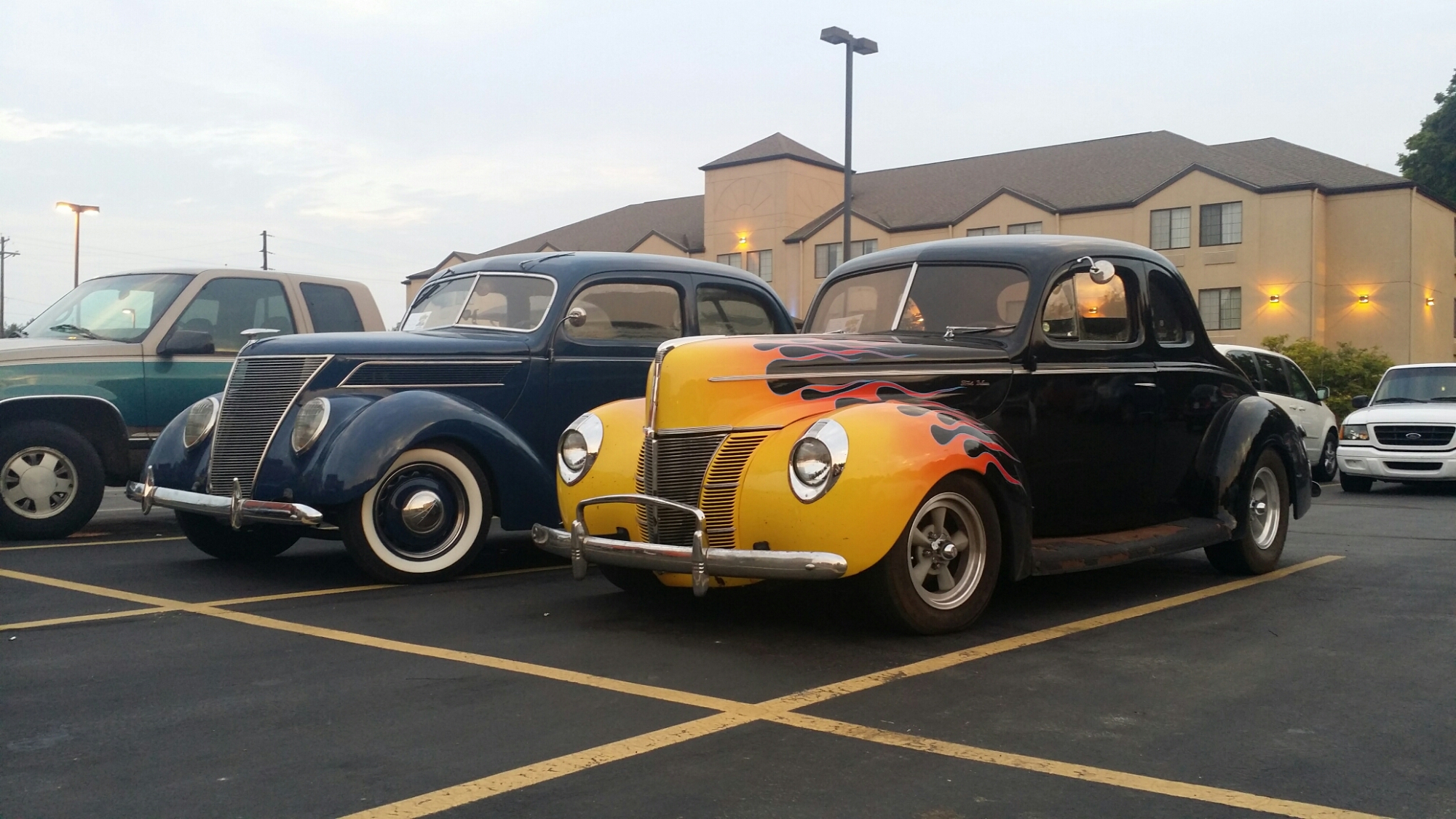 Friday night, parked next to Clay Vance, at the Comfort Inn, down in Henderson, KY. 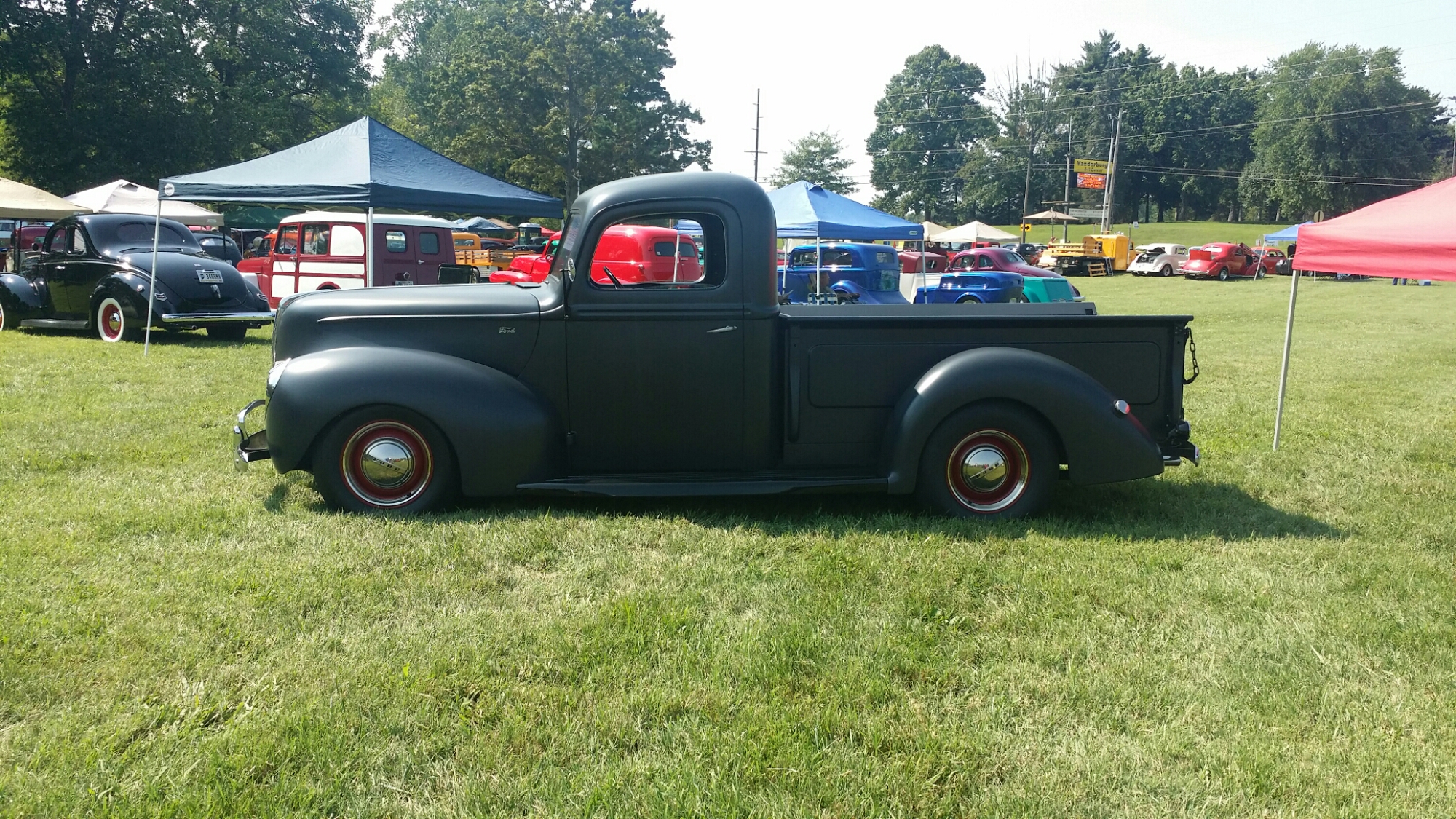 This ’40 pickup had a great stance. The owner had just brought it home from Arizona, not too long before the event. 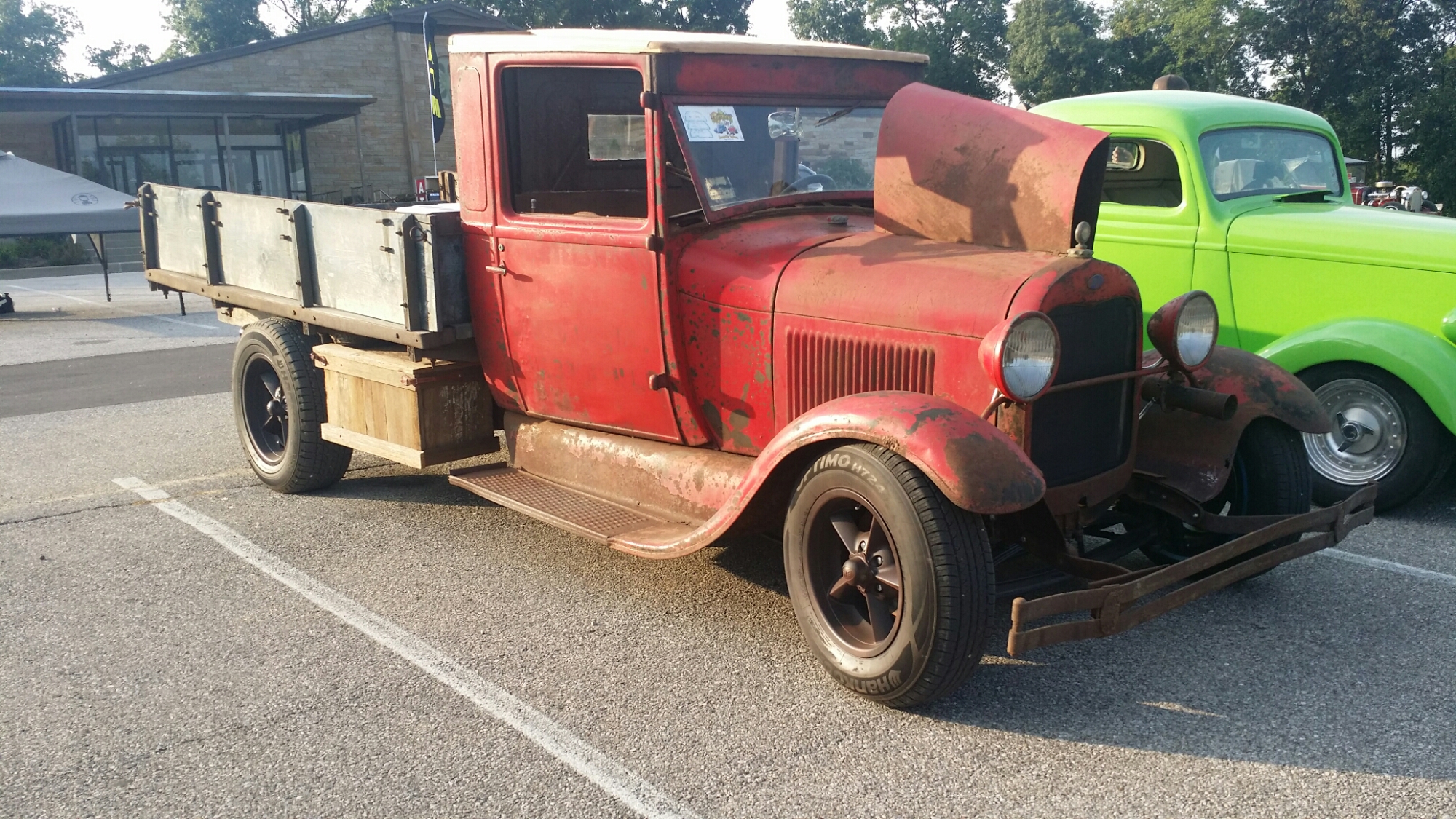 I’ve got a thing for stake trucks. This guy was having a blast driving this Model AA around, despite that he broke a coilover 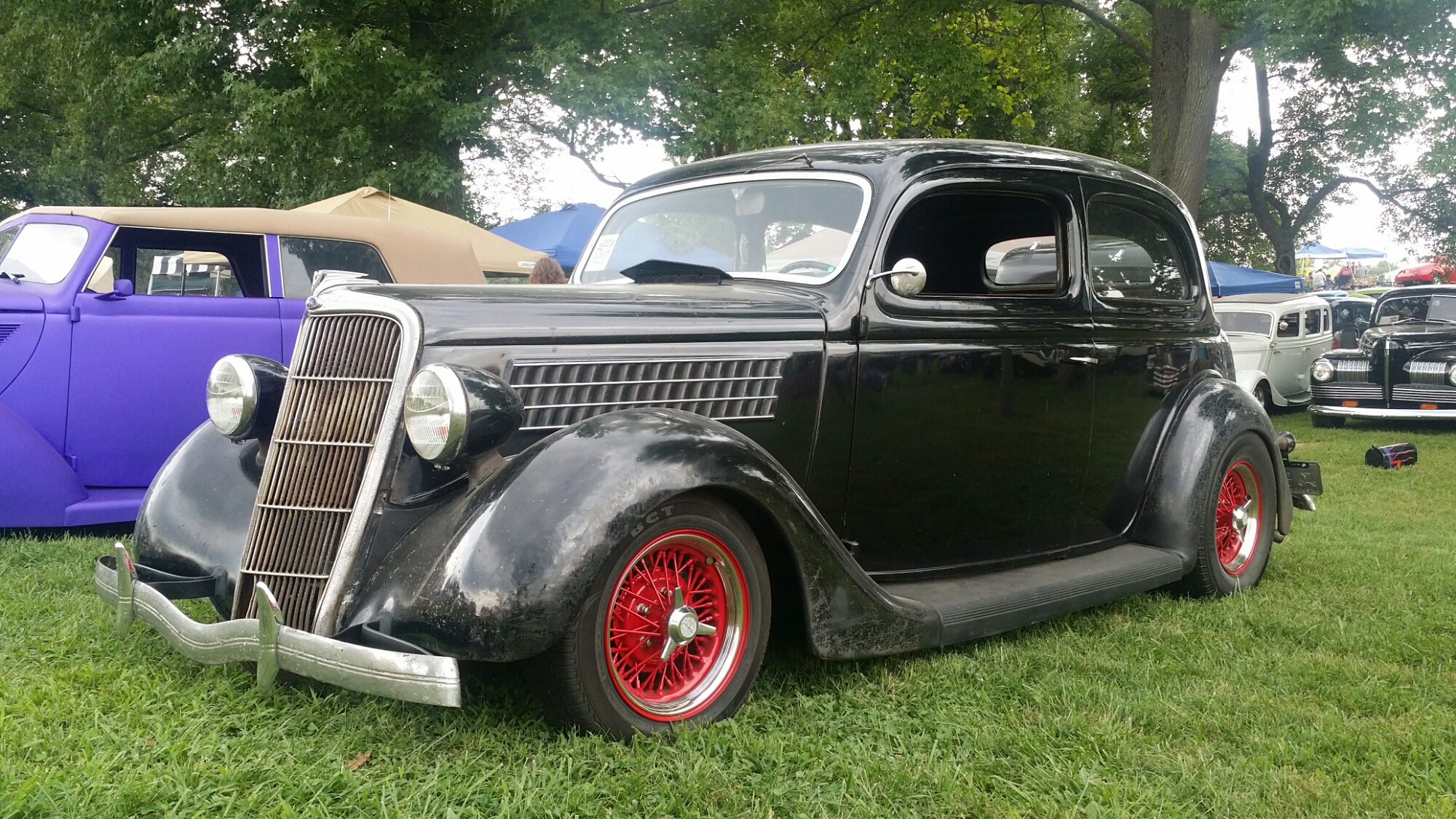 One of my favorites at the event, a survivor ’35 Ford humpback sedan. 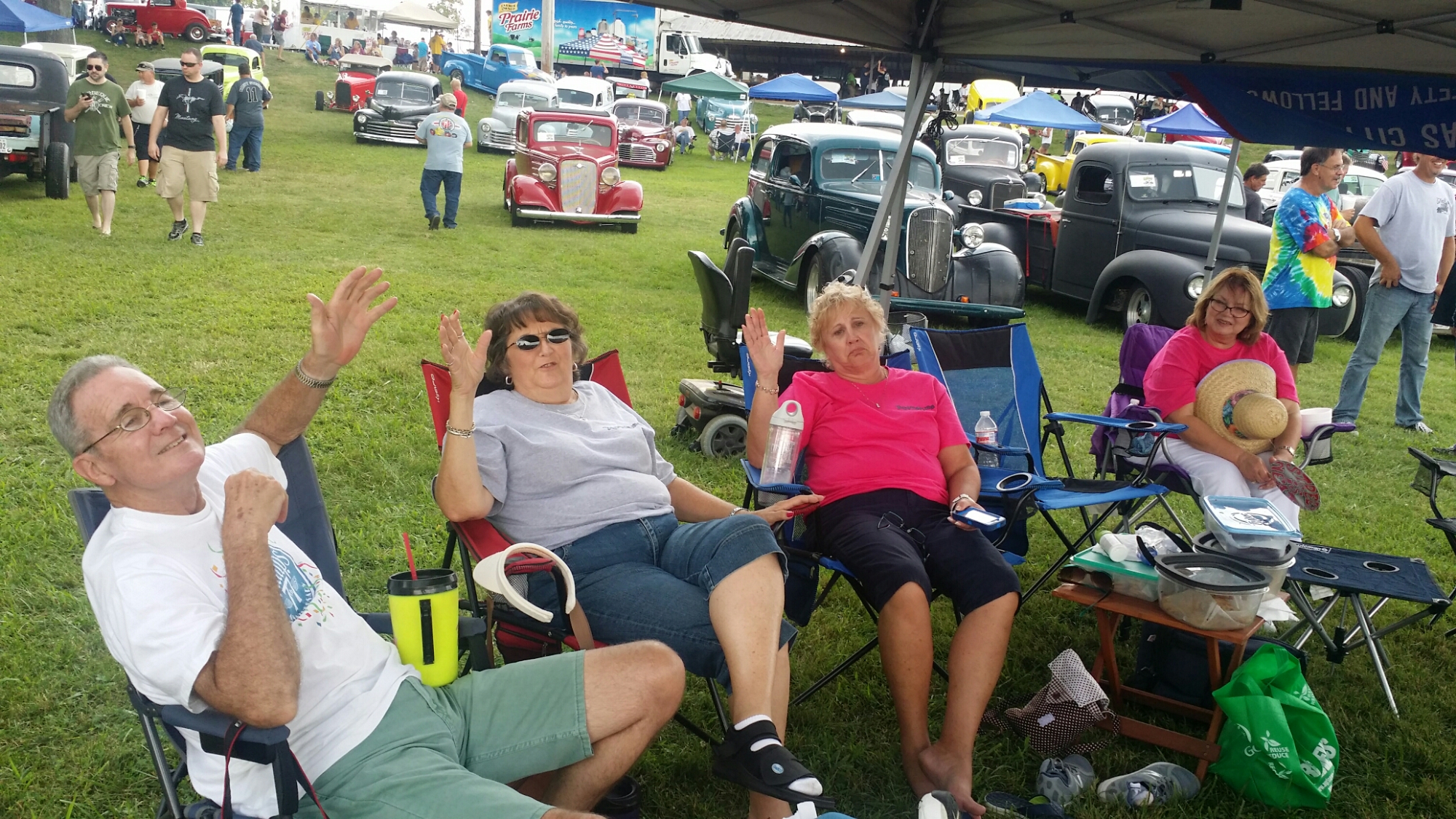 The Rodtiques, of Kansas City, were sad because Dan and Sharyl Stears could not make the trip with them. 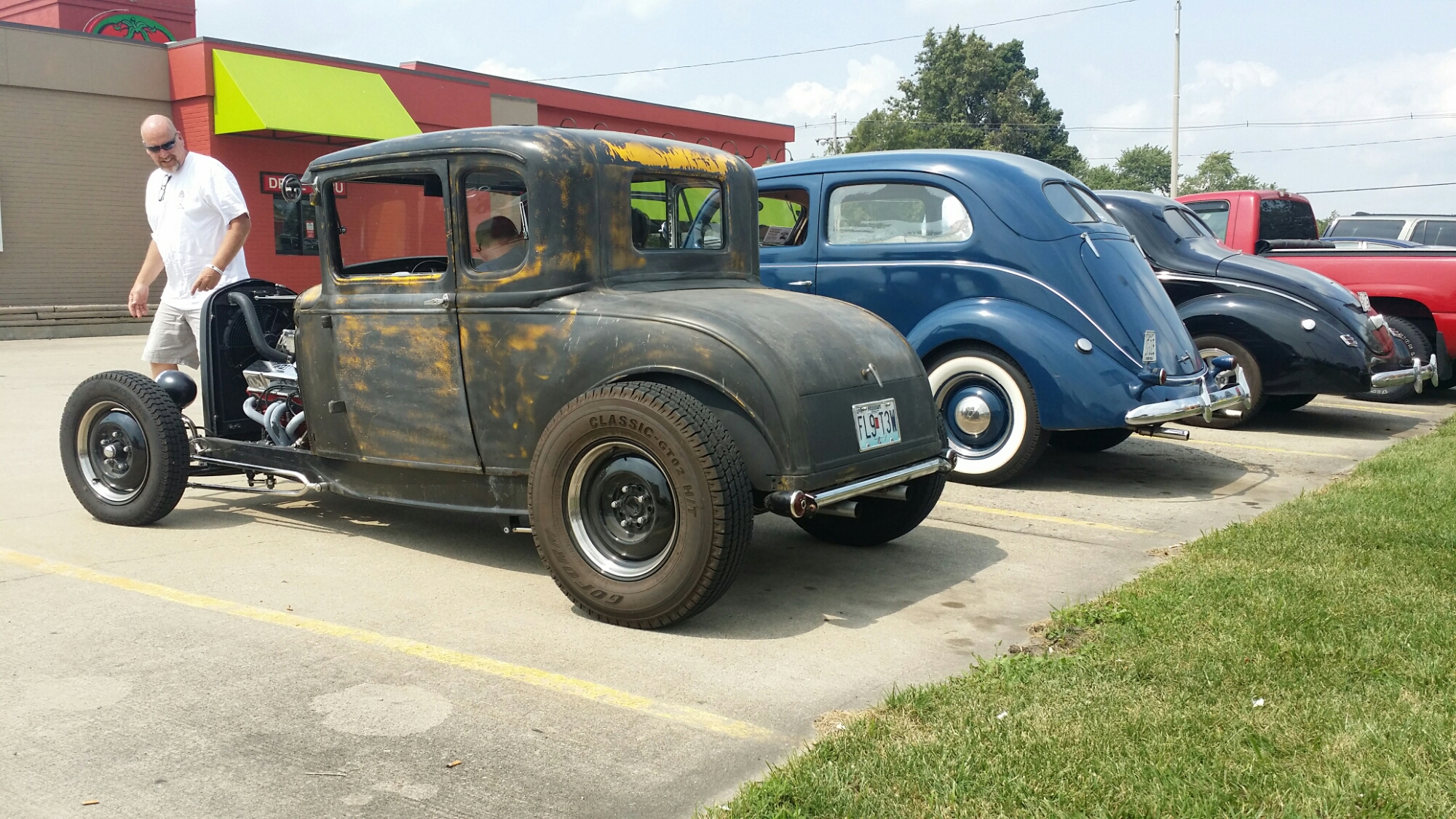 On the run home, we stopped and had the traditional Fazoli’s lunch, in Mount Vernon, IL. 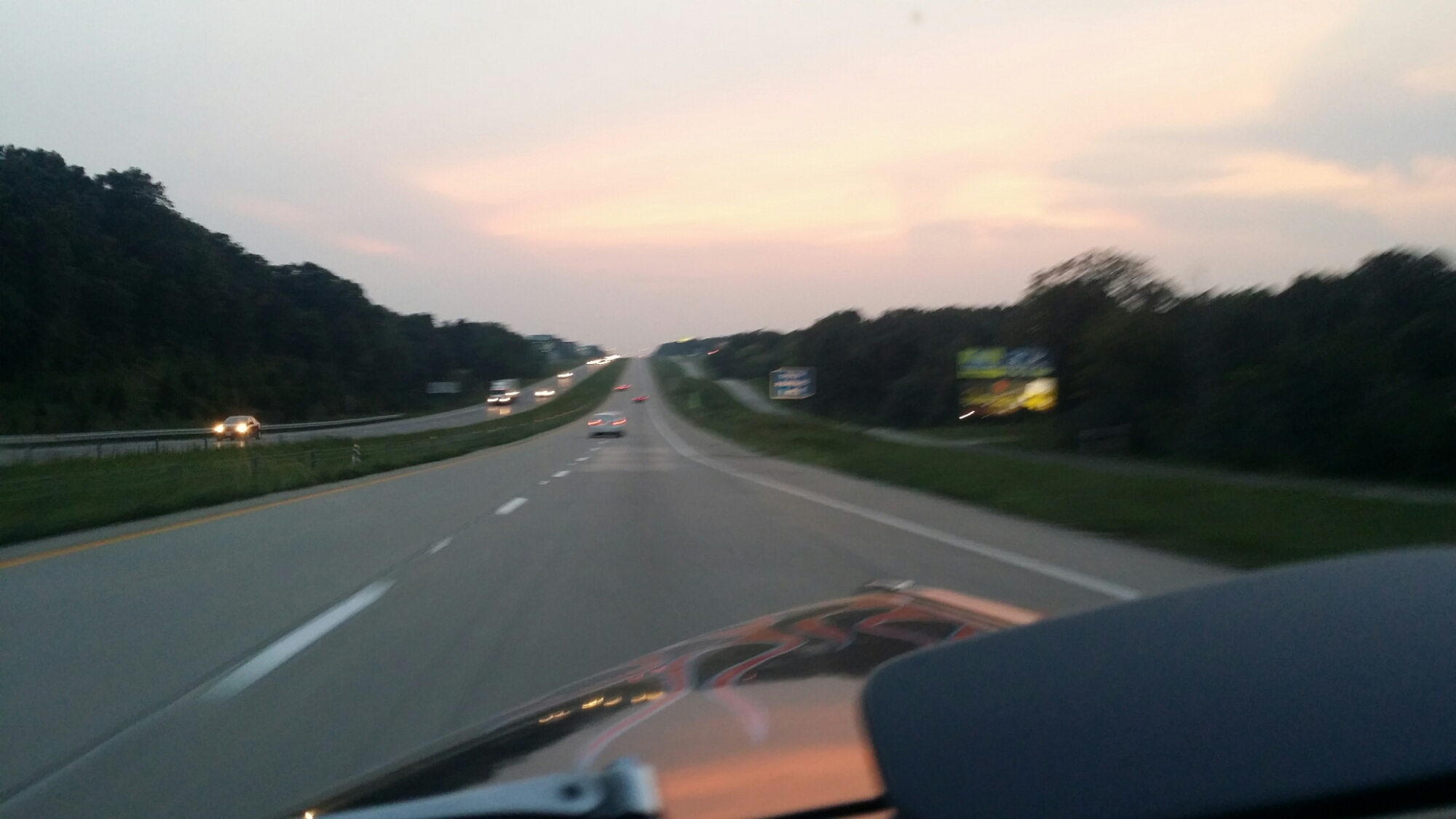 A sunset photo from Sunday night, somewhere along Hwy 44.

Waved goodbye to Doug and Lori, as I pulled off Hwy 65 and headed towards the house.